The story starts with a blunder. In fact, my first major blunder of the year. A couple of weeks ago, I was enthusiastically adding continuous integration and deployment to my projects. It the midst of it, I found out that GitLab CI can be used to build artifacts for deployment. For example, a project could be build, and provide the built binaries as artifacts.

Since I had been adding CIs to many of my projects, one of my requirements was to have PDFs for my documents (resume, project papers for instance) to be built automatically any time I change the source on Overleaf. For those who don't know, Overleaf is an online service that allows people to write and compile Latex online. However, there is no way to directly link to the latest built PDF. I realized that GitLab's pipeline artifacts could be used to automatically generate the PDF every time the source code is changed.

Luckily, Overleaf also provides a Git URL to access the source code of the project. Now initially, my plan was to somehow automate the extraction of the source code of the project from overleaf, and then build it in GitLab. But having a Git interface to Overleaf meant that I could just use the GitLab's repository mirror feature! If you haven't had any experience with GitLab, repository mirror feature just checks the source of the Git repository every hour, and in case the source is changed, it pulls the repo and syncs the changes to the GitLab repo. If pipeline is set up, then the pipeline will be built everytime the sync shows change in the source code, and the built PDF would be updated. Simple right?

Anyway, I set it up as such for my resume and one of my upcoming research papers. I even made shortcuts from https://pallav.xyz/resume and similar URLs pointing to the link of the artifact. I thought it was a wonderful setup until...

The git URL provided by Overleaf does not need any authentication. When I set up GitLab mirror sync, the repository showed the URL of the synced repository right under the title. 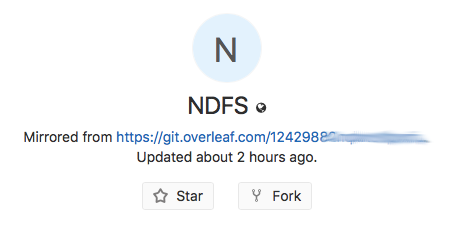 This meant that anyone with that URL could clone, and make arbitrary changes to the PDF that was so conviniently updating every hour. That means, anybody could've changed my resume to say absolutely anything. That's scary.

Out of panic, I first made a new repository on GitLab which pulls the Overleaf repo as a part of the pipeline, and set the URL as a secret variable instead of the mirror URL. Then I set up a pipeline schedule for the new GitLab repository, so that it too checks for updates every hour from the Overleaf repo.

Once the new repo pipeline was working, I duplicated the Overleaf project to another project and deleted the original one (since the URL was in a way compromised). I went ahead and changed all redirects (like pallav.xyz/resume) to the new repo's artifacts. Once the disaster mitigation was complete, it occured to me that I could not possibly be the only one to have made this error.

With my researcher mode on, I started looking out for other projects who might've done the same error as me. For one thing, even if some person was smart enough to not publically expose the URL, even merging the branch of an overleaf project to an existing git project would, by default be named...

so, it was still likely that people may not have realized that the innocent looking git.overleaf.com URL would give every person in the world, write access to their project.

But you know what's even more interesting? In the above URL, if I replace git by www, it would become the read-write URL to the actual project in overleaf. You don't even need to use Git to exploit this!

Coming back to my researcher mode - I knew what my first place to look should be - GitHub. GitHub has an amazing advanced search. So I went ahead and in GitHub and searched for git.overleaf.com. See what I mean?

Over 2000 results in the commits section itself!

A quick look at the projects showed multiple resumes, and other documents. Apart from the merge requests, there were people who were using the Overleaf Git URL as sub-modules in their repositories. Since the submodules aren't synced, it was clear that it was meant for their own convinience, and the actual document was not meant to be public (let alone read-writable by world). Such git-modules' URLs were visible in the .gitmodules files of repositories. The interesting ones in this category were unpublished papers, which were (are) still undergoing work/research. 😞

Well, for one thing, I'll be a lot more careful about what I put online. Hopefully this article will also encourage other people to follow suit.

I had reported this as a potential vulnerability to Overleaf, and got their response fairly quickly. For some reason, Google had marked the mail as spam, so I was a bit late in seeing the response.

Anyway, that's all for today. In case you liked the article, share it with your friends 😊